In 2021 the Quatuor Agate were prize-winners at the Young Classical Artists Trust International Auditions (YCAT).

Currently based in Paris, it is first their love for Berlin, that brings these four passionate members of the Quatuor Agate together for the first time.

These young people, native of the South of France (Marseille, Toulouse and Bordeaux), find in Berlin the ideal environment for their natural curiosity. 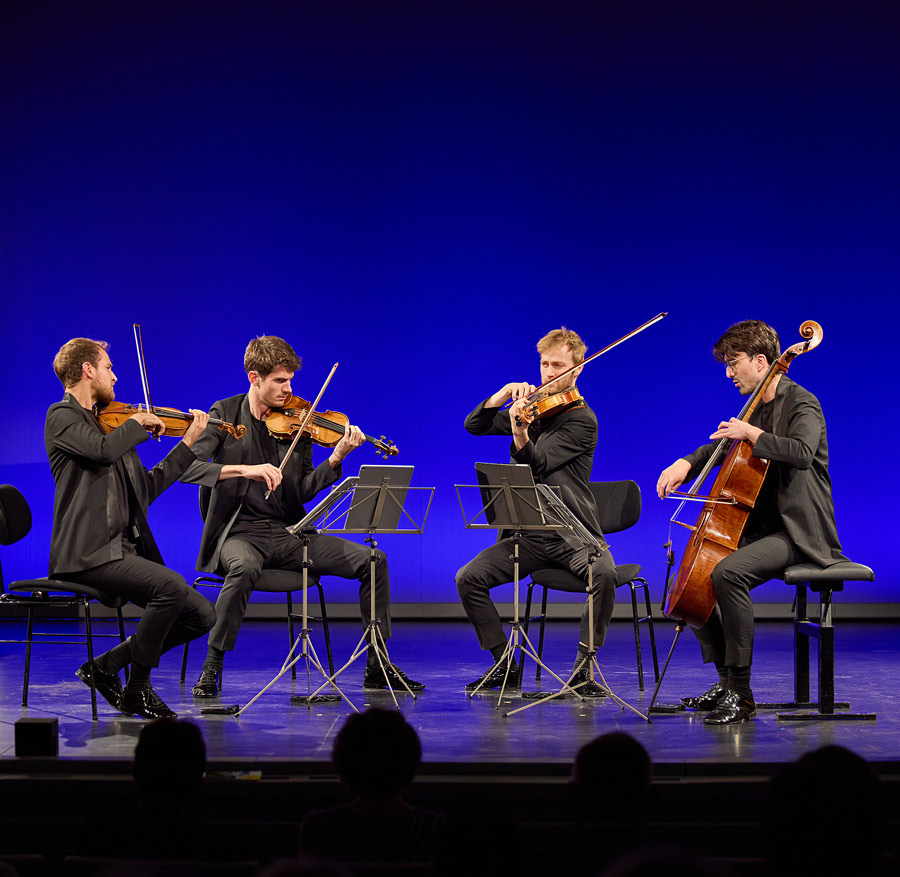 They share an enthusiasm for bold, alternative, even underground projects

and in 2016, decided to set up the Quatuor Agate to explore together their musical passions.

Their encounter with the string quartet repertoire is a decisive turning point in the life of the four musicians.

They have extensive and varied musical experience (from solos to chamber music, including with the prestigious Berlin orchestras), and find in this new repertoire an infinite source of expression and inspiration. 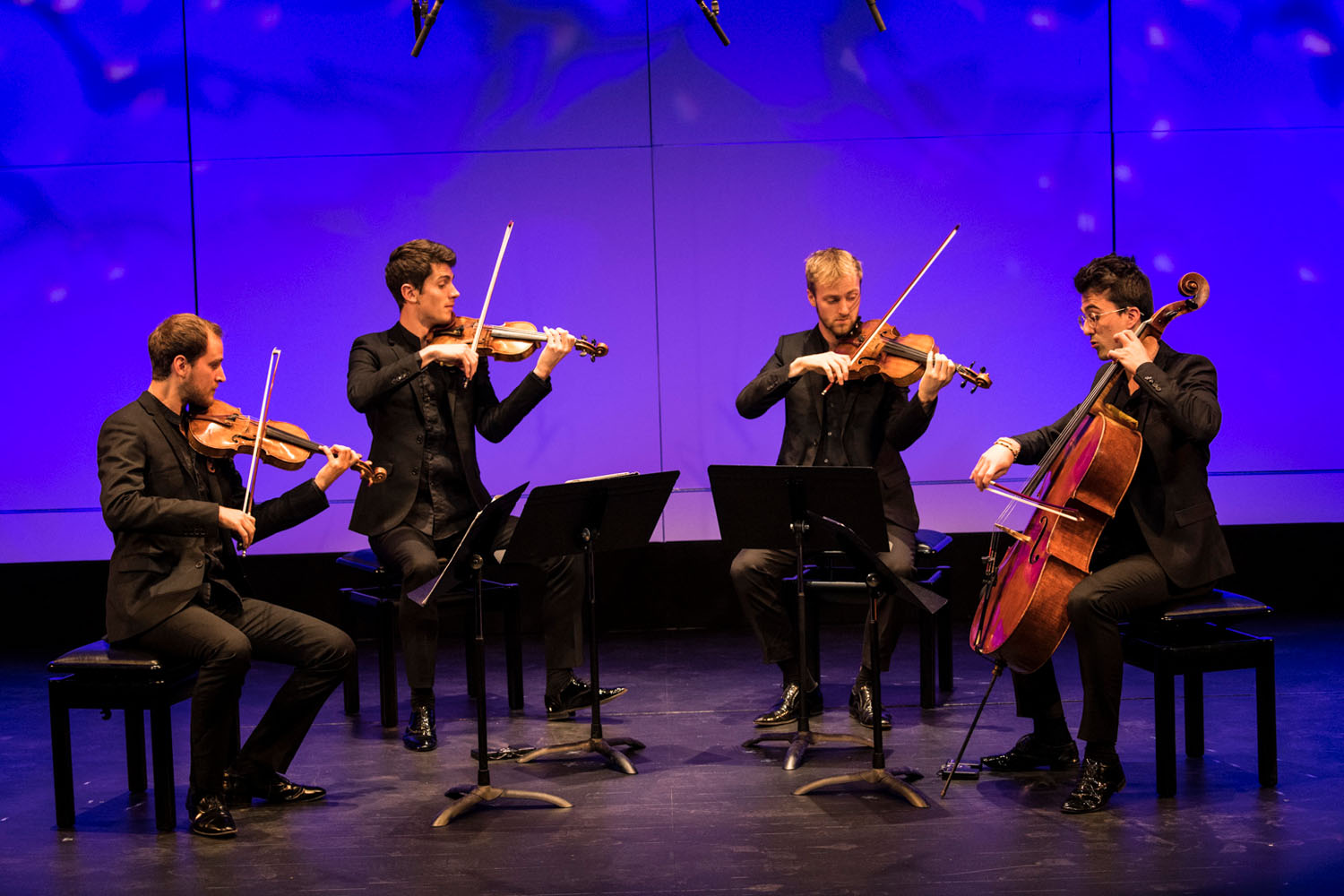 Within the quartet, they discover how their personal aspirations must be balanced with the needs of the group.

Also, that working together daily transcends their own abilities and reinforces their growing desire to carry on playing together.

To share this unique and wonderful repertoire, the Quatuor Agate created the CorsiClassic Festival in 2016. Based around Ajaccio, its mission is to promote chamber music in areas of the island where classical music is rarely available.

Their encounter with the German musical tradition plays an equally important role in their artistic training.

Having all been through the CNSMDP (Conservatoire National Supérieur de Musique et de Danse de Paris), they went on to study another 2 years at the Hochschule für Musik “Hanns Eisler” in Berlin with Eberhard Feltz; there, their own French musical tradition is confronted with the German tradition of the musical discourse.

With their artistic development in mind, the Quatuor Agate moved to Paris at the start of 2018 to study under the guidance of Mathieu Herzog, former violist with the Ebène Quartet. The quartet studied also with Luc-Marie Aguera at the Conservatoire de Paris. 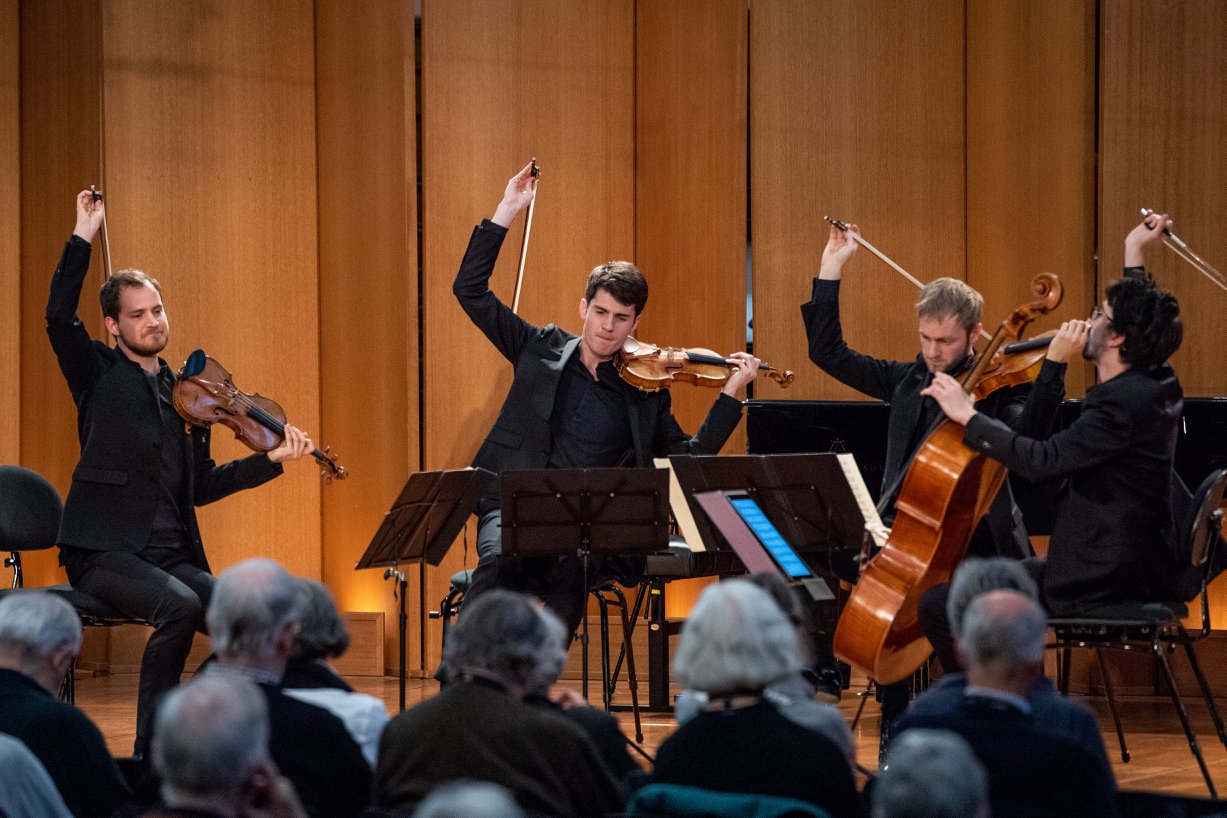 The quartet is quickly invited to perform in several international festivals and venues : 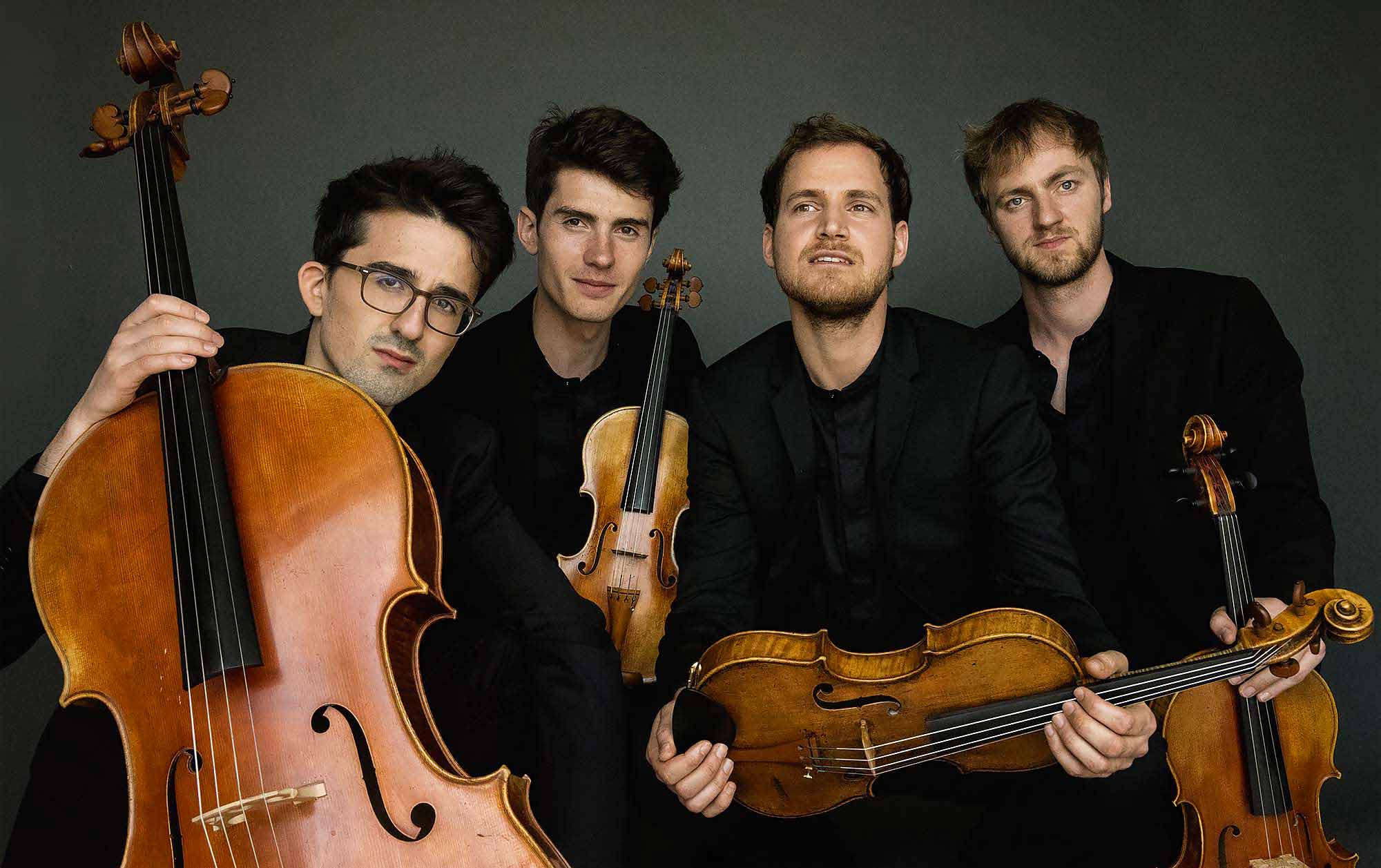 Since 2018, The Agate Quartet is in residence at the Fondation Singer-Polignac and has been selected for taking part in the Le Dimore del Quartetto project.
In 2019, the quartet becomes a resident of ProQuartet and associate-artist at the Festival La Brèche.
From 2021, the Quatuor Agate is supported by the Günther-Caspar Stiftung.

The Quatuor Agate is a prize-winner of the Verbier Festival Academy 2019 and the Irene Steels-Wilsing Competition 2020. The quartet is a « Young Classical Artists Trust » 2020 Finalist. 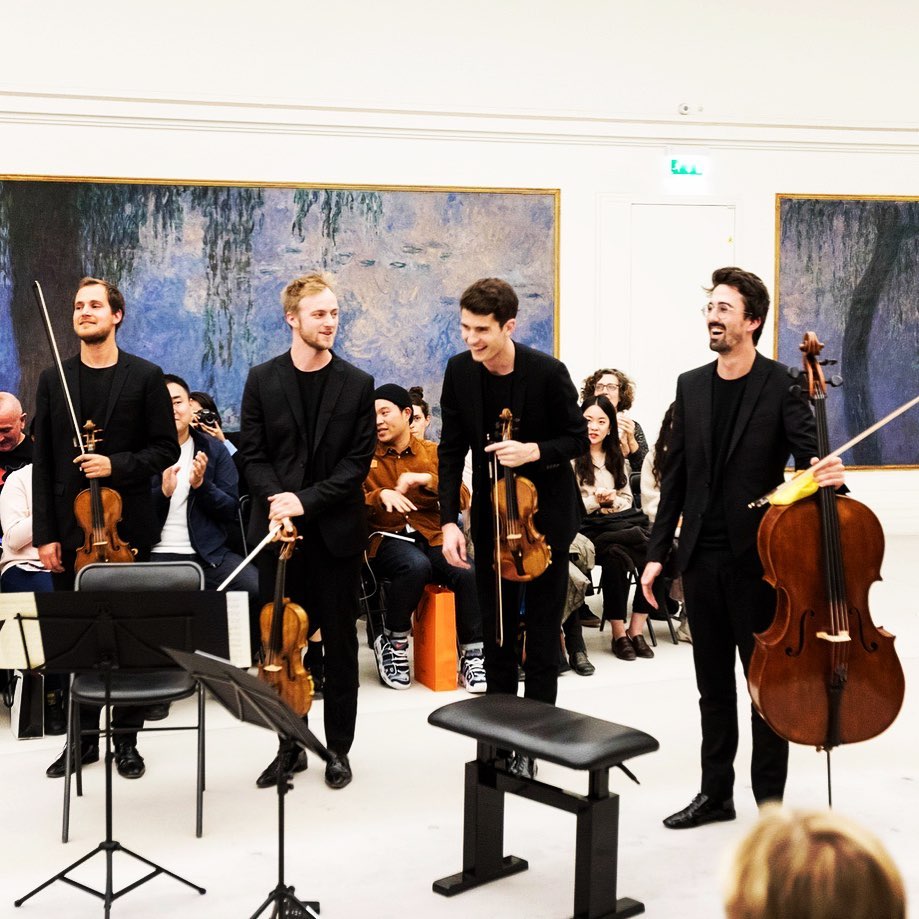 The origins of the Quatuor Agate
lie in a concert that never took place.

In October 2015, its four members were living in Berlin. Adrien, Thomas, Raphaël and Simon – all more or less recently transplanted from France – were making the most of the ever-changing city’s vibrant cultural life, especially its eclectic musical scene. 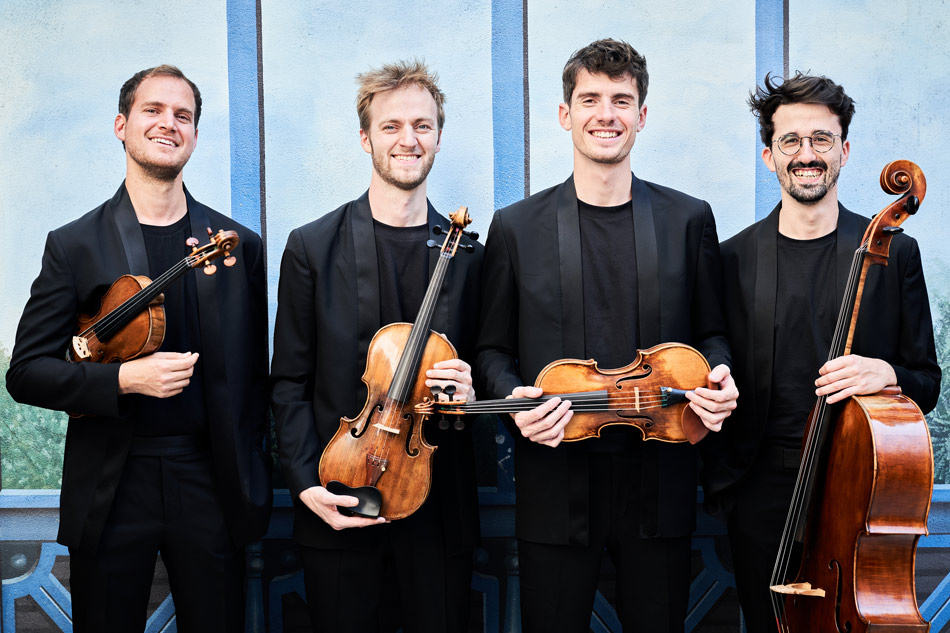 Raphaël, a viola player, received an invitation to perform in Corsica that winter. He discussed it with the three other members of the future Quatuor Agate.
They were already good friends, but the ensemble was yet to take formal shape, since each player was making his own way as a musician.

They decided unanimously to accept the invitation, enthused as much by the idea of performing Schubert and Mozart in a church in the mountains of Corsica

as by the prospect of escaping to the sunny Mediterranean from dark and chilly Berlin.

They started rehearsing and the weeks went by. Meanwhile, in Corsica, the planned concert faded gently into oblivion.

When Raphaël tried to get in touch with the organisers, either the phone just rang or he went onto voicemail.

In the end, realising the situation was futile, he informed the other players that the concert was off. 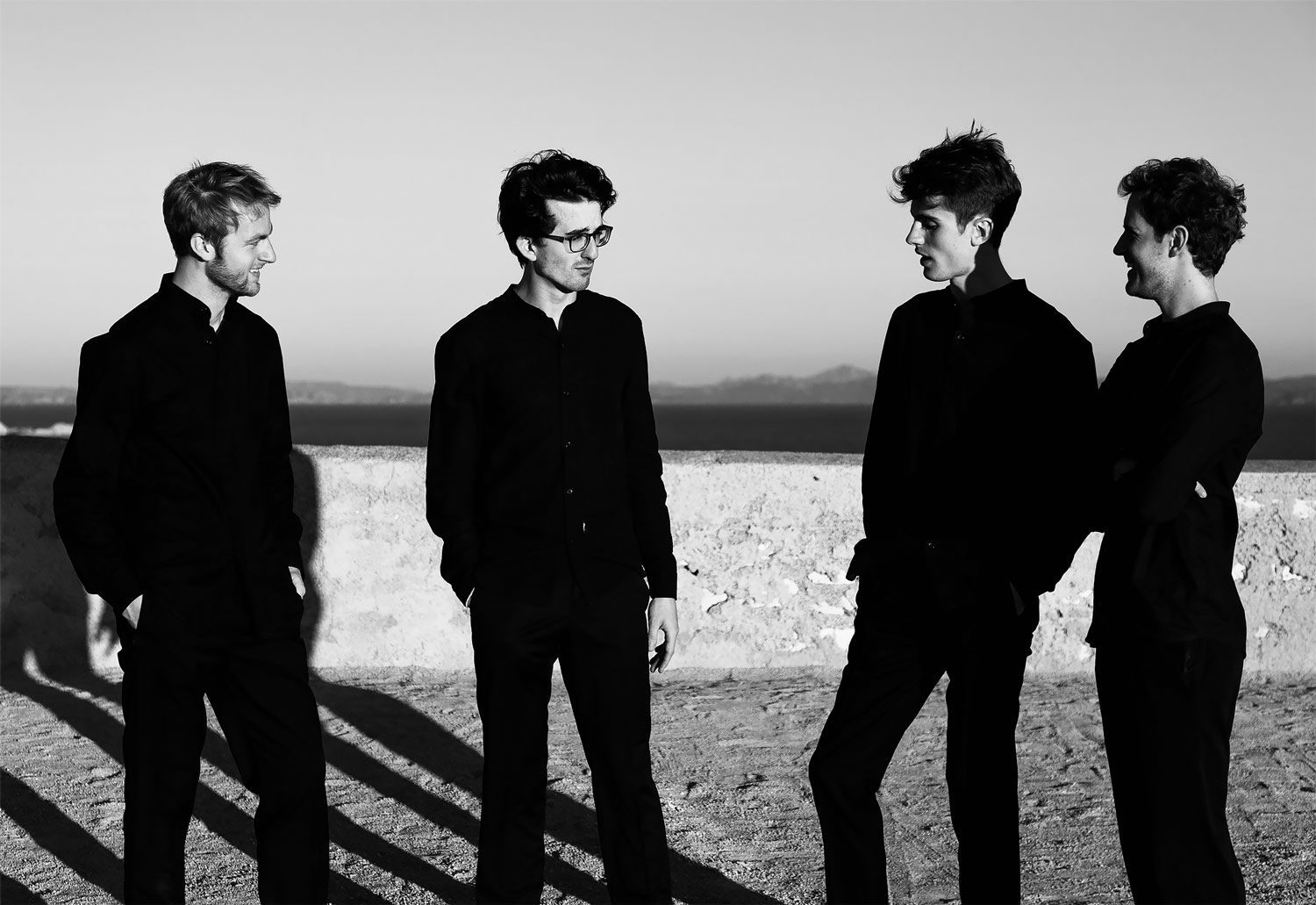 But the phantom concert gave birth to something.

The players had been obliged to give their ensemble a name – shared with a semi-precious stone and Johannes Brahms’ second love, Agathe von Siebold – and all the rehearsing had sparked a passion for exploring the quartet repertoire.

The following spring they met the pedagogue Eberhard Feltz, who worked with them at length, acquainting them with the dialectic of Haydn, the harmonic complexity of Bartók, and the metaphysical power of Beethoven.

They came to realise that if they really wanted to do justice to the art of the quartet (while still having time to go and see a film now and then), they would have to leave the orchestral academies that had brought them to Berlin in the first place. 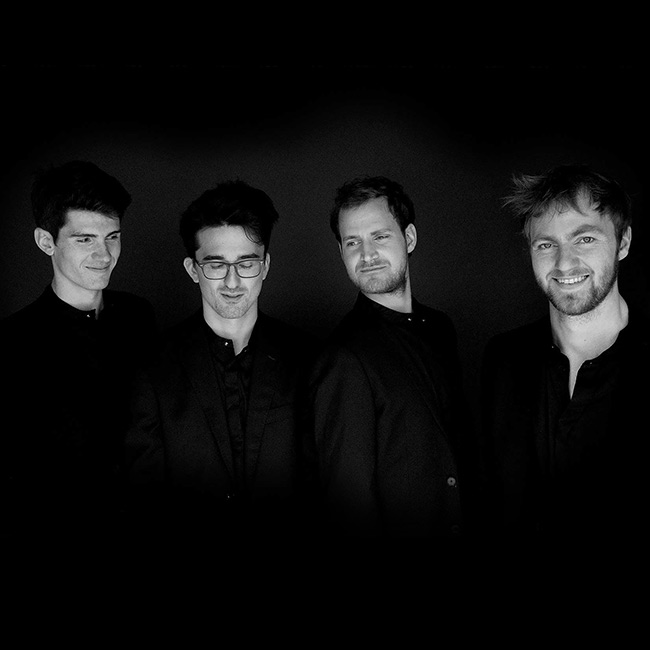 Once their decision had been made, the Quatuor Agate could embark on its first concert tour.
Where else but in Corsica?

Since then the quartet has toured several continents and appeared at festivals in such places as Verbier, Venice, Melbourne and Montreal.
The players are based in Paris, where, savouring the experience of becoming more than the sum of their parts, they continue to develop as a musical ensemble.